Of the five major B2B technology collateral types covered in a 2010 survey of corporate technology decision-makers conducted by Eccolo Media, three showed a significant decline in consumption during the last 12 months, according an update released in October 2011. Consumption of product brochures/data sheets went down 13%, from 83% last year to 72 percent in 2011, while white paper consumption decreased 22%, from 76% to 62%.

In addition, results of the “2011 B2B Technology Collateral Survey Report” indicate consumption of case studies dropped 25%, from 67% to 50%. Meanwhile, the consumption of podcasts and video remained more or less unchanged from 2010 to 2011, with podcasts climbing only 5%, from 40% to 42%, and video holding steady at 59%. 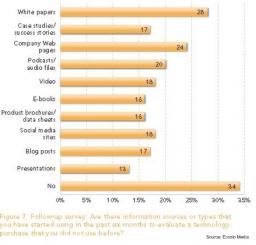 When asked if they had started using any new types of collateral in the past six months, 34% of respondents said no. But among those who had recently discovered a new form of collateral for evaluating technology purchases, the numbers were evenly spread among all content types, both traditional and non-traditional.

Twenty-eight percent reported that they began consulting white papers for the first time in the last six months. Twenty-four percent named company web pages as a new source of information, and 20% cited podcasts. The other seven types of collateral, from presentations (13%) to video (18%), were clustered together so closely that the differences between them were insignificant.

Print collateral is by far the most common form of marketing material produced, despite the rise of multimedia options, according to October 2010 CMO Council survey results. Survey data indicates that a solid majority of marketing executives are still producing the same types of material they have been for years. Print collateral leads with 84% of respondents producing it, followed by presentations (72%) and folders and handouts (66%).

About the Data: Global Marketing Institute distributed an online survey to 501 executives of US companies with influence on technology decisions in June 2011 and provided the results as raw data to Eccolo Media for analysis.