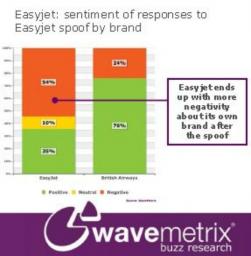 Beware Backfiring Social Media AdsMarketers considering negative, mocking or even charitable social media promotional campaigns should first carefully consider how consumers may react, according to a new report from WaveMetrix. Results from “Q3 2011 Benefits and Limits of a Social Media Fanbase” indicate a poorly designed social media campaign can create the wrong type of online buzz.

As with other social media parody/satire campaigns analyzed by WaveMetrix, EasyJet’s post seems to have backfired, as consumers jumped to the defense of British Airways. More than half of comments about EasyJet were negative, as consumers criticized the “bitchy” poster. In contrast, more than three-quarters of comments about British Airways were positive, as consumers defended its “great ad.” WaveMetrix says this suggests that brands should refrain from using social media campaigns which attempt to tarnish a competitor’s reputation, in order to avoid the risk of a negative backlash.

Reaction to Microsoft Ad Not Petty 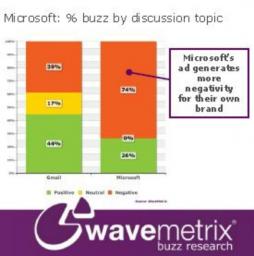 A viral online attack ad released in summer 2011 that was intended to promote Microsoft’s Office 365 email service and reveal the weaknesses of Gmail instead resulted in consumers branding Microsoft as “petty” and largely ignoring the merits of Office 365, which WaveMetrix says demonstrates the drawbacks of negative campaigns to marketers.

Negative comments on the Microsoft brand made up 40% of consumer discussion about the ad. In contrast, only 6% of discussion focused on Office365. 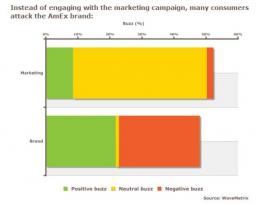 Amex Seen as Self-serving Instead of Charitable

In September 2011, American Express invited UK Twitter users to share the things that inspire them and has promised to donate to the Prince’s Trust charity for every

tweet or retweet containing the hashtag #AmexBeInspired. WaveMetrix analysis reveals that almost half of all posts generated by the “Be Inspired” charity campaign are about the American Express brand itself, and the majority of these posts are negative.

While many tweeters used the #AmexBeInspired hashtag for its intended purpose, a large number of others posted sarcastic, angry comments about the American Express brand and their scepticism surrounding the charity campaign. WaveMetrix analysis indicates this suggests that brands that pledge to make a donation for every retweet, tag or Facebook like they receive risk angering consumers, who sometimes feel the donation should be made regardless.

Brands should consider their existing fan base when rebranding or launching new goods via social media, according to other results from “Q3 2011 Benefits and Limits of a Social Media Fanbase” which indicate successful brands involve fans in social media rebranding efforts rather than trying to force a positive response.